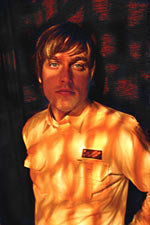 It is not a debut, but a fresh start nonetheless. After six years and three albums, Danish duo Puddu Varano last year chose to go their separate ways. But one half, Morten Varano, is keeping the music and at least half of the name going. "Step Up" is the first album by the new one man line-up. A delicious and loungy experience in sound, and an oasis of soul, downbeat, latin, afro and elegant pop.

Morten Varano is by no means left alone, though. The ten tracks on the album is blessed by a number of guest appearances. Diane Charlemagne, known as regular singer with Moby, appears on three tracks. Another prominent vocalist is American Wunmi, who has sung for several of the biggest names on the more soulful and latin-jazzy wing of the club scene - a.o. Masters At Work, Trüby Trio and King Britt. Other featured artists include Norwegian singer Unni Wilhelmsen, the former Wynona-members Camilla Munck and Moogie Johnson, Swedish rapper Chords, sitar-player Jonas Stampe (Mofus), bassplayer Sune Martin (Blue Foundation), brass player Jens Bjørnkjær (Nobody Beats The Beats), drummer Nikolaj Bjerre (Lamb) and more.

"Step Up" is the culmination so far of a musical development, that takes on back in 1997 when keyboard player Morten Varano and drummer Alex Puddu form the duo Puddu Varano. The two know each other through their shared past in Danish bands Excess Bleeding Heart and Nerve. The contagious live energy of Alex and Mortens sense of programming makes a great combination and debut album "Freakuency" with vocal appearance by Jonas Bjerre (Mew) is released in 1998 on BMG. Clearly influenced by the big beat scene of its time, lead by international acts such as Fatboy Slim and The Chemical Brothers.

Morten takes on new inspiration as co-promotor of the club night Lust at Copenhagen venue Rust. Here he is introduced to DJ-culture and some new players on the electronic music scene. Especially London DJ Ramon Santana, who is part of the crew around the label Tummy Touch. Together they start producing afro-influenced breakbeat in the name of Los Chicharrons. At the same time Morten launches his solo project Sunny Face and has a club hit with the latin sounding "The Sunny Cha Cha Cha".

This development rubs off on the sound of Puddu Varano. As the second album "Star 70" hits the shops in 2000, the rumbling breakbeats from the debut is replaced by a more warm and organic sound tinted by latin and blaxploitation. The association to the clubbing environment leads to several tracks being released on twelve inch-singles, and Puddu Varano-tracks starts popping up on international compilation cd's. In the meantime, Morten has set up two record labels, Murena Records and Voodoo Recordings, and starts releasing records by Carla Alexandar, Ben Horn and Los Chicharrons.

The third album, "Time To Grow", is released in 2002. The sound has become more cool and loungy og features guest appearances by the famous Danish singer Pernille Rosendal (Swan Lee) and Mortens new discovery, English vocalist Lady Z (aka Z Star). The album gets support from DJ-stars such as Richard Dorfmeister, Roger Sanchez and Ben Watt, who puts the single "Blue Sky White Sand" at the top of his DJ-chart. In 2003 Morten forms the duo Slow Train with Lady Z, and their debut album "Illegal Cargo" becomes hugely successful with releases on Tommy Boy records & Wagram Electronic a.o. Two tracks appear on one of the worlds biggest selling compilations, "Hotel Costes".

Unfortunately, the interests of Alex and Morten start moving in different directions, musically and professionally. In spring 2003 they take the consequence and agrees to dissolve the duo. But "Step Up" is proof that the story hasn't finished. It's a new chapter that has been opened.