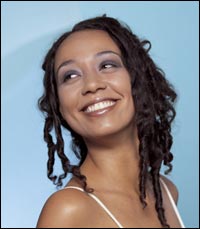 From the age of seventeen Carla Alexandar has toured the whole world . First as a professional dancer for Jorge Ben and later as a singer. In 1999 she was playing with the legendary Brazilian band Daúde at the Roskilde Festival. Here she meets up with her old friend the percussionist Fernando Negalé that convince her to stay in Denmark.This is the beginning of a new era in Carla’s life.

Soon she is introduced to Morten Varano (that is running Murena Records). They start working together on a project that is build on Carla´s poems, Brazilian music tradition, electronics and breaks. The first result was É Assim that was essential leftfield single in 7 magazine.

The lyrics of Carla Alexander are modern, conscious and based on her written poems. It´s about leaving Brazil and living in a foreign country in Scandinavia. About how it shapes your senses and you see things different. About the memories about brazil with the samba dancing and the Caipirinha-drinks.

With a varied interest in new styles of music D&B, Break Beat and House as well as her Brazillian influences it is easy to see why DJs such as Kruder & Dorfmeister, LTJ Bukem, Coldcut and Phil Mison have all picked up on her previous records.