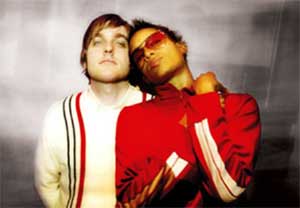 In the three years from the release of their debut album Illegal Cargo, SLOWTRAINSOUL have traveled miles. The souljazzelectro duo have been on countless compilations Hotel Costes, Buddha Bar, Nirvana Lounge, Café Mambo with combined sales of 1.2 million records worldwide. Their music has been used in film and TV including the US hit series Six Feet Under'. On the live side of things they continue to excite audiences globally with their energetic show from Roskilde Festival to Radio City Music Hall, SLOWTRAINSOUL formerly Slow Train are showing no signs of slowing down. In fact, their latest musical adventure shifts it up a gear.

A year in the making, Santimanitay was recorded in several studio's around the world from Copenhagen to LA, London to Trinidad , collaborating with local musicians on their travels. The multi-talented duo worked together on production, with Morten on keys, engineering-programming and Lady Z on gtr, perc, lyrics, additional programming and voice.

The first single Mississippi Freestylin' is a swampy hip-hop roots vibe and like its predecessor In The Black Of Night (Illegal Cargo), it tells a dark tale of the supernatural. Lady Z's lyrical narrative links the track's together and draws from her West Indian roots using Voodoo, Yoruba and Trini Ole Mas' figures as characters in the songs.  Eight In Nine' and  Ma Soucouyant' (soo-coo-yah) reveal a more avant-garde edge to the duo and are also linked to the story, which unfolds with every album.

The deep live strings, smoky horns and slow jazzy offbeat of  Sexing The Cherry' , a track which highlights Morten Varano 's minimalist production skills is a stand out song. Lady Z's voice captures the mood, seductively relating the torture of infidelity.  Shine' is the only other down tempo track on the record, a funk fuelled reggaeton slow burner.

The hypnotic deep house flava of  I Want You To Love Me' is compelling and roots itself in the kind of soul jazz that melts in your mouth. The City Never Sleeps' shifts into fifth gear delivering some sweaty funkt up house and is an instant classic while Inferno' mixes a Bo Diddley four to the floor groove with Hammond, country gtr, and a blues vocal that captures the fun of SLOWTRAINSOUL live! The soulskapunkfunk of  California Stars' also has its appeal and is the rockiest track on the record.

Las Lap' symbolizes the end of the adventure . It's a crossover of soca, drum n bass, tassa and house. Musically and lyrically this is a homage to Trinidad Carnival and is the name given to the last few hours at end of the festival. The track features Steel Pan and Tassa drums both Trini musical innovations. Destinations Unity Release Euphoria!

Lady Z is the alter ego of London based acoustic artist z-star . The charismatic soul jazz singer-songwriter & mc has written, recorded and performed* with artists such as Nate James*, Omar*, Keziah Jones * , Natacha Atlas , Nigel Kennedy* and soul jazz legend Terry Callier who lovingly gave her the name Lady Z during a recording session at Incognito's Blue studio. Under the moniker z-star she released her debut album on VirginEmi ita (2004) to much press acclaim and subsequently was asked to do a seven page spread for Italian Vogue. On the dance music scene, Z* has collaborated with, Max Sedgely, Los Chicharrons, Puddu Varano, Marathon Men and Goudi with current releases on Mr Bongo, Irma, Voodoo , Murena and Sunday Best.

The STS sound remains classy confident and uncompromising. The success of their debut album Illegal Cargo with high radio replay tracks like Naturally, In The Black Of Night and Trail Of Dawn attracted many music lovers worldwide and so the adventure continues.

Lady Z and Morten Varano are a magical duo, truly gifted at creating soundtracks to your life. Santimanitay reminds us of this.